Price includes UPS Ground shipping within the contiguous U.S. Additional shipping will be required for Hawaii, Alaska, and international orders. 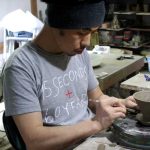 Kuriya Masakatsu is extremely skilled at incorporating elements of the traditional pottery of Japan’s past into the contemporary designs of his own creation. His work featuring green oribe glaze that originated in the 16th century is crisp and modern. Kuriya-san comfortably produces tea and sake wares as well as pour-over coffee droppers and these ingenious ceramic speakers.

This set of speakers shows Kuriya-san’s enthusiasm for music as well as pottery. His unconventional use of ceramics for enclosure shows the material’s inherent potential. The internal speakers are by FOSTEX (model FE87En) in Japan and have a beautiful sound that is further enhanced by the bass reflex design enclosure that surround them. These represent Kuriya-san’s greatest adventure in clay–yet.  (Set of two)