Skip to main content
Entoten is on vacation and our online store will be unavailable for the next few weeks. Thank you for your understanding and sorry for any inconvenience.
← PREVIOUS ITEMNEXT ITEM → 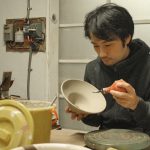 Ceramic artist Kubota Kenji makes slipware for daily use in the famous pottery town of Mashiko, in Tochigi Prefecture of Japan. His bright and sophisticated work involves a slipware technique called slip trailing, which uses clay diluted with water to a creamy consistency to make surface decorations by using a dispenser.

Kubota-san’s work carries on the tradition of English slipware that was introduced to Japan over a century ago by the Mingei movement and which greatly influenced Japanese makers. His work is a unique combination of traditional slipware technique with sensibilities that are reminiscent of Japanese stencil textile designs and patterns.