Price includes shipping via USPS within the US. International orders will require additional shipping.

100% cotton with unfinished edges on the narrower ends
Colors may bleed in the beginning so please wash separately from other items.
Designed by Harada Fumiko and chusen dyed in Tokyo Japan by Iseyasu 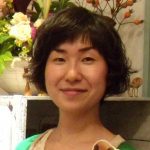 Harada-san designed giga choju in homage to choju giga, the Japanese national treasure and the oldest animal caricatures from the 12th-13th Centuries found at Kosanji temple in Kyoto. Giga choju is a play on the Japanese word ‘ginga‘ that means galaxy with the familiar characters of choju giga posing as constellations. The chusen craftsman expertly mixed small amounts of purple and moss green into the blue dye to express the ‘galaxy’ to great effect. Spot the rabbit wearing a tiger kigurumi

This tenugui was designed by Harada Fumiko and hand-dyed by the craftsmen at Iseyasu Chusen Studio, which has been in business for three generations in Tokyo’s Edogawa ward. The Iseyasu craftsmen use the Chusen dyeing method in which a stencil is used to apply a ‘resist’ to each of the approximately two dozen layers of fabric that are folded and stacked on a vacuum table. The dyer then uses glue on the top layer to create barriers to separate different colors of dyes. Finally, the dyes are poured from the top and pulled through the layers using vacuum pressure that creates identical patterns on both sides of the fabrics. The Chusen method drenches the fabric’s fibers in dye, leaving room for the colors to mix and the edges to blur into a very appealing effect. Although mostly a manual process, Chusen uses just the right amount of mechanical assistance to lessen the labor intensity while providing room for the craftsmanship to shine.