Cast-iron kettle with hollow, forged handle with air holes (mushikui)
The inside is not coated
Approximately W6.3″xH9.25″
Holds about 47 floz.
Made in Tokyo Japan by Yokotsuka Yutaka

The morning-glory motif is a beloved one in Japan, particularly in the Tokyo area. Although the flowers were introduced to Japan in the Heian period, they became especially popular during the late Edo period, when tetsubin became popular among the ordinary people eager to enjoy full-leaf green tea, a small luxury that became available to them. 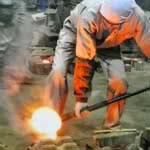 Yokotsuka Yutaka grew up hearing the sounds of the furnace and mingling with the foundrymen working at his grandfather’s factory in Komatsugawa on the eastern edge of Tokyo. This consummate craftsman has now spent over 40 years at the same location, dedicating his time to creating Japanese cast iron kettles called tetsubin, using age-old, traditional methods.

Yokotsuka-san’s tetsubin are meticulously made, demonstrating equal concern for beauty and functionality. For example, he only uses his self-made molds once to insure that the patterns on the kettles are crisp. The works are remarkably lightweight and spouts are well balanced, pouring beautifully without dribbling. The small perforations on the kettles’ forged, hollow handles remain cool even when heated.

This tetsubin is made of cast iron and its interior is untreated. Instead, after each work is cast it is baked in charcoal to prevent interior rust until a natural mineral layer is formed through use. The exterior is coated with an iron mordant base and urushi lacquer that gives it a reddish brown appearance.