USPS Priority Shipping cost is included in the price for US customers. Additional shipping will be required for customers outside of the US.

Approximately L48″ x W34″
Made in Japan by Yamauchi Takeshi
The colors or lines on any part of the noren maybe uneven due to its hand-dyed nature.
Noren fabric dividers are usually hung in doorways. They can also be hung between rooms, on walls, or in windows. 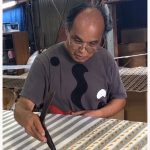 Renowned Japanese textile designer Yamauchi Takeshi has been designing and dyeing textiles for over 60 years at his studio, Atelier Nuiya, in Hamatsu City in Shizuoka. Yamauchi-san’s work is known as ‘kata-e-zome’ (pronounced kata-eh-zomeh), a term coined by the Japanese government to specifically recognize the achievement of Yamauchi-san’s teacher of 6 years, the legendary textile designer Serizawa Keisuke (1895-1984), who was awarded a Living National Treasure title in 1956. Following in the footsteps of his revered teacher, Yamauchi-san carries out all aspects of the production processes by himself even though he is 81 years old. This involves a set of highly labor-intensive work routines including creating the stencil, applying resist, and finally dyeing that is normally shared by several craftsmen in a traditional studio.