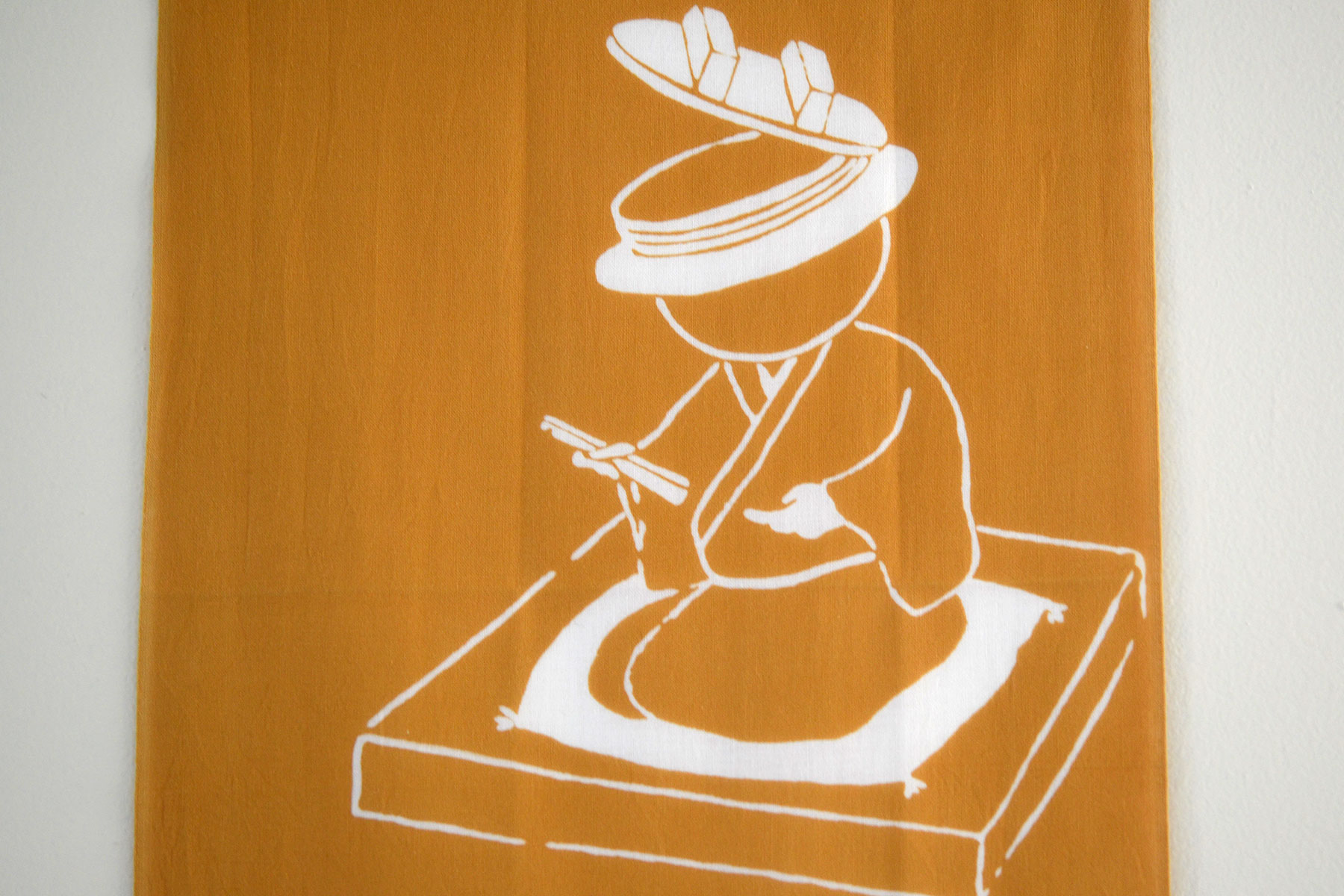 Tokyo tenugui designed by Harada Fumiko in our shop ->

Why do some designs appeal universally? This most vexing of questions is often on the mind of Japanese artist Harada Fumiko as she creates her textile designs. Her answer can be found in the bold patterns and beautiful colors featuring a diverse variety of subjects that are central to her work.

Harada-san says that, “there are variations in the sensibilities of different generations and cultures, but designs that appeal to the hearts of many are universal”. Her designs are full of allegorical references to culture and traditions mixed with humor and wit. They are reminiscent of the works by the masters of Edo period ukiyo-e or woodblock prints that continue to enchant people across borders and generations. Harada-san calls her brand ‘Play on Words,’ which is synonymous to her style of work.

Harada-san has loved textiles from a young age. She was fascinated by how designs and texture on fabric showed different expressions from paper. In her late teens, she spent all her money from a part time job buying second-hand vintage kimonos dating from the early 20th Century. “Luckily I was short and so all the old kimonos fitted me perfectly,” she chuckles looking back at her atypical adolescence.

Her early passion turned into the desire to study and learn about textiles and designs. She was especially impressed by Charles Rennie Mackintosh, a Scottish architect and designer, whose work was featured at an exhibition in Tokyo that she went to see. “I was very attracted to his attitude which valued craft.” Harada-san eventually decided to study textile design at the Glasgow School of Art, whose main building was designed by Mackintosh and was the center of the Arts and Crafts Movement in Scotland in the late 1880s and 1890s.

“I chose the Glasgow School of Art because it offered a project-based curriculum, rather than the technique-based style of classes taught at Japanese universities,” she explains. She also felt that the British curriculum was more suited to her approach, which was to be able to create what she envisioned while considering the advantages and disadvantages of both handcraft and machines. Industrialization and the demise of handcraft had occurred much earlier in Britain than in Japan, so the British curriculum helped her consider and balance these aspects.

One of the current projects of this globally minded artist is the design of tenugui, the all-purpose Japanese cotton towel that became popular among ordinary people during the Edo period. Tenugui are still very popular in Japan today and people use them for a variety of purposes, such as dishtowels, potholders, and even as head-covers, a tradition that started in Edo.

The technique used to create tenugui is called chusen, which is a relatively new method devised in the early 20th century to dye about 20-25 sheets of fabric at the same time. In chusen, a stencil is used to apply a ‘resist’ to each of the approximately two-dozen layers of fabric that are folded and stacked on a vacuum table. The dyer then uses glue on the top layer to create barriers to separate different colors of dyes. Finally, the dyes are poured from the top and pulled through the layers using vacuum pressure that creates identical patterns on both sides of the fabric.

“I’m attracted to the fun of designing in a limited space (tenugui are approximately 13 inches wide and 35 inches long) and the beautiful effects of blurring”, Harada-san explains. In many other types of dyeing, color is applied or printed onto the surface of a fabric leaving a crisp design. Chusen, however, drenches the fabric’s fibers in dye, leaving room for the colors to mix and the edges to blur into a very appealing effect. Although mostly a manual process, Chusen provides just the right amount of mechanical aid to lessen the labor intensity while providing room for the craftsmanship to shine.

Harada-san draws each design by hand, which is then carved by a craftsman into a stencil. “Too much detail cannot be expressed in chusen, so I adjust the design before the stencil is created”, she points out.

The greatest appeal of chusen is that it is a collaborative process between the designer and the craftsman. In her giga choju tenugui, which was created in homage to choju giga, the oldest animal caricatures from the 12th-13th Centuries found at Kosanji temple,  Harada-san explained to the craftsman that she wanted to express the galaxy and attached photos from NASA to illustrate this idea. The craftsman created the different shades of blue, together with just the right amount of purple and moss green and the galaxy was expressed beautifully.

Harada-san recently started printing designs on larger fabrics and hopes to broaden her textile design opportunities into a wider range of materials in the future. She also hopes to expand her corporate branding design work in which she effectively uses modern design while referencing the tradition and history of the company.

We are very pleased to be able to introduce Harada Fumiko and bring her beautiful work to the U.S. for the first time. I’m sure the Glaswegians are proudly saying “gaun yersel!” to this talented Japanese artist.