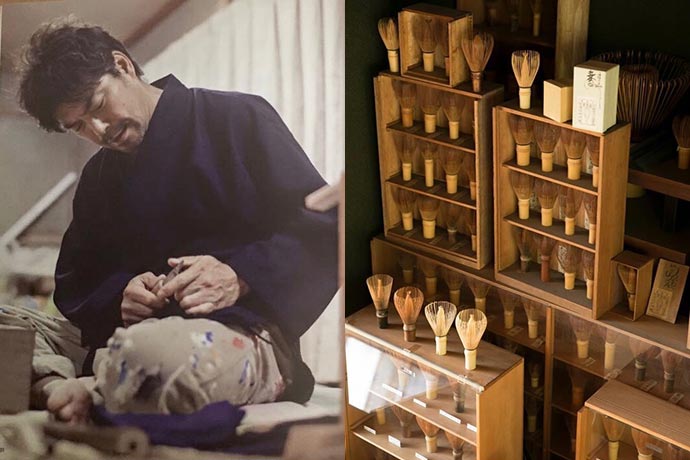 In this 90 minute webinar that will be conducted in Japanese with English translation, participants will learn about the history of bamboo tea whisks, its material, types, and how they are made. There will be a Q&A session with Tanimura-san after the presentation.

Tea Whisks by Tanimura Tango in our shop ->

I took this photo this morning to show some of the different types of tea whisks that we received from Nara’s master tea whisk maker Tanimura Tango today. It is astonishing to see this photo and then to think that the utensil was originally devised 500 years ago, around the time that Michelangelo painted the Sistine Chapel ceiling, and that it has remained virtually unchanged since. 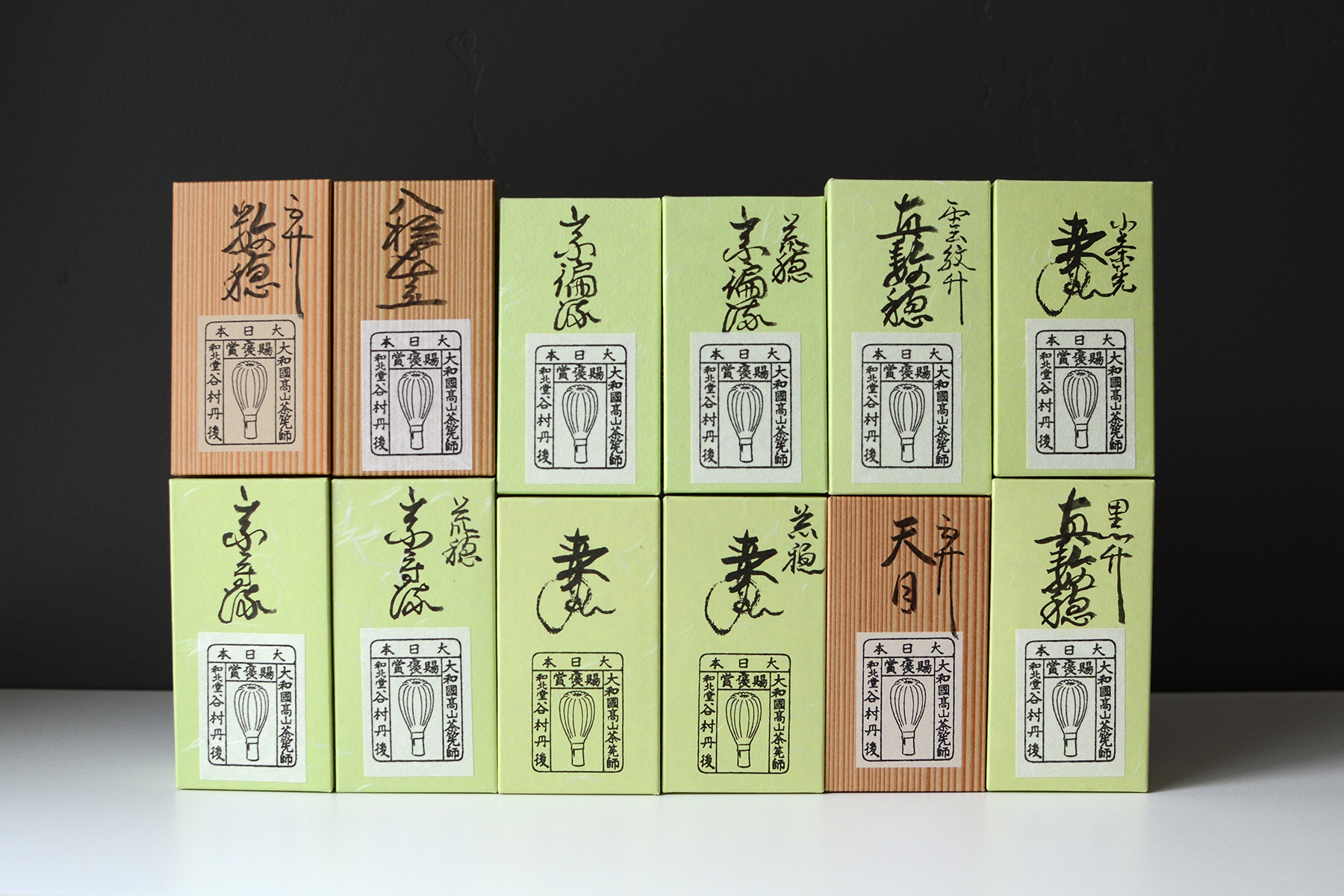 The Sistine Chapel is visited by over five million people every year, while the chasen is about the only utensil that is not given a name or revered even in the tea room. So I just wanted to say that the chasen are the little known heros of the tea room. These boxes containing the whisks read: “Great Nippon; awarded for excellence; great Yamato country’s Takayama tea whisk maker; Wahokudo Tanimura Tango”

Takayama chasen by Tanimura Tango in our shop ->

At Entoten, we carry a wide variety of the highest quality tea whisks made by Tanimura Tango, the master maker from Takayama Nara. His family has been making bamboo tea whisks for the last 500 years. With many different forms and types of tea whisks to choose from, customers have asked me how to go about choosing the right one for them, so here is my guide to choosing the tea whisk that is most ideal for you.

Foam or No Foam

I think the most popular way to prepare matcha in the U.S. is with lots of foam on top. This is a thin type of matcha called usucha. If you are new to preparing usucha, then the best whisk is either kazuho or 80 hondate chasen. These whisks have approximately 70-80 tines and they are also the most widely available forms of tea whisks on the market. The curled tips of these whisks allow for the tea to be efficiently stirred to create foam.

If you are already an experienced tea whisker, then I urge you to try the shin-kazuho tea whisk. This type of whisk has approximately 70 lightly curved tines, and while it requires a little getting used to, it excels at creating very fine foam and less bubbles. The bonus is that the tines do not break as easily because their tips are not curled. This type of whisk in white (hachiku) bamboo is used by the Grand Master of the Urasenke tea school.

I also want to point out that, contrary to popular belief, creating lots of foam is not the only ‘correct’ way to prepare usucha. While the Urasenke tea school prefers to make its tea with lots of foam, other tea schools and their masters prepare their tea with less foam, like Omotesenke and Mushakouji-senke for example. Soshuryu whisks used by Mushakouji-senke are straight-tined, precisely to create less foam. Personally, I think usucha with less foam allows for the delightful umami and bitterness of tea to be more clearly tasted, and for the flavor to linger longer in your mouth afterwards.

A less commonly prepared but delicious version of matcha is thick tea, or koicha, which is made with a lot of powder and little hot water to create the consistency of a gravy sauce. If you regularly prepare thick tea, then rough tined whisks are recommended. These whisks have thicker tines that do not break while you mix the koicha. If you only occasionally make thick tea, kazuho or shin-kazuho tea whisks may also be used for this purpose.

The tea whisk is meant to be regularly used and ultimately the tines will break and the handle may crack, at which point it should be replaced. When you are looking for a new whisk, I hope that you try out many kinds of whisks and not restrict yourself to a certain school or form.

Black bamboo tea whisks, for example, are less commonly known but their dark austere appearance may perfectly match with your tea bowl. Tea whisks tied with different colors may be chosen according to your mood, the seasons, and your own preferences.

Rest assured that every whisk is made with the utmost care by the Tanimura family. You can read more about the process and attention that goes into the making of these tea whisks in my blog post about Tanimura Tango.

Tea whisks by Tanimura Tango in our store ->

While consumer products today have shelf lives measured in months, perfection came early to the tea whisk. How early? Tanimura Tango, who is the latest descendant of a family that has been making tea whisks or chasen for 20 generations, reckons about five centuries ago. Tanimura-san chuckles and says “we haven’t introduced new products for a very long time, and that is probably a terrible model for companies today”.

But in place of innovation is a devotion to listening to the specific needs of the user. This is why the Tanimura family makes nearly 100 types and forms of chasen required by different tea schools. “While the chasen was perfected many years ago and the process of making them has remained the same for generations, it is my responsibility to maintain the forms and quality”, Tanimura-san elaborates.

A good chasen is durable and easy to use. “These two elements directly conflict with each other because usability is created by the flexibility of the tines, but if they are too flexible they break easily. Strength and usability have to be balanced carefully and only bamboo can fulfill these requirements within the form,” Tanimura-san explains.

The current forms of bamboo chasen were established in the early 1500s around the time when Tanimura-san’s ancestors began making chasen in the hills of Takayama in Nara prefecture. Legend has it that the chasen was originally developed by a prominent poet named Takayama Souzei (-1455), the son of the local ruling family, with advice from his friend and founder of wabi-tea Murata Juko (1423–1502).

Each chasen is made from a single piece of bamboo that is roughly 4.75” (12cm) long, and split by hand with a small knife. The number of outer tines on a whisk can be up to about 120 and the thickness of the bamboo increases with the number of tines. To make a 70 tined chasen, the bamboo has to be split into 140 pieces to create the inner and outer tines.

After splitting the bamboo, the top halves of the outer tines are carefully shaved down to give flexibility to the bamboo. This process is called ajikezuri and the process is often said to affect the flavor of tea prepared with that chasen.

Tanimura-san points out that the most difficult part of the chasen–making process is learning to instinctively adjust the hands while making the whisk. Bamboo come in varying thicknesses and their hardness is also affected by the humidity of the day. He also points out that getting to know the essence of the bamboo is crucial. This is because “bamboo have personalities and the only way to learn is by working with tens of thousands of bamboo to gain the experience.”

Historically, chasen makers owed their livelihoods to the support given by feudal lords and tea schools. The name “Tango” was bestowed on the Tanimura family by the Tokugawa Shogunate as the provider of tea whisks and carried on through successive generations.

The Tanimura family continues to directly provide chasen to grand masters of many leading tea schools to this day. “It is a big responsibility and privilege to be able to get my work reviewed directly by the users. Some days they praise me and I get motivated, other days they scold me and I strive to do better. I believe that our history and ability to listen to the voice of the end-user is our biggest asset”, Tanimura-san says.

In the past, the chasen makers worked at night while the rest of the world slept, and the technique was exclusively taught to the eldest son to keep the process secret. Those days are long gone, and nowadays over 70 percent of the chasen sold in Japan are cheaper imports. Tanimura-san though believes that when used, it is easy to recognize the superior quality of Takayama chasen that has been rigorously user tested by the most discerning tea drinkers for centuries.

While learning the way of tea (chado) allows people to bring beauty into their lives, elaborate formalities are not required for tea to be enjoyed. “As the former grand master of Urasenke once said to me, ‘for tea, some matcha, a tea bowl, and a tea whisk will suffice’. I wish that more people around the world will casually drink tea using the chasen from Takayama. In the five minutes of preparing and drinking tea, one can forget all their worries and problems. It is my dream to be a part of that,” Tanimura-san says.

So have some tea and take a momentary respite from the world. And to make the tea, look no further than the chasen perfected at the hands of Tanimura-san and his predecessors over the ages.