Glass plates by Sasaki Shoko in our shop ->

Leave it to the Japanese to come up with the most appropriate names for the months of the year. June is Minazuki, which literally means “the month of water.” This is the time of year when the rice paddy fields are filled with water, and also of relentless downpours because this is prime rainy season in Japan.

With tea classes cancelled until at least autumn, my desperation for Japanese sweets has reached new heights and so I embarked on making “Minazuki,” a delicious rice cake sweet named after the month.

I first tasted Minazuki when visiting the Chado Research Center in Kyoto in 2015, where the museum entry fee included a bowl of matcha tea and a seasonal sweet. I’m terrible at remembering the times when I traveled to various places, but because I was served Minazuki, I know it was in June. I later also learned that people in Kyoto eat this triangular mochi dessert topped with red beans cooked in sugar often during the month of June.

A mochi topped with azuki red beans sounds relatively simple to make, but there is that stupid perfectionist in me that whispered, “but if you’re making Minazuki, the azuki can’t come from a can, it’s got to be those big Dainagon azuki.” In addition, the whisper continued: “Add some kudzu in the mochi to make it certainly Kyoto style (from my provincial Tokyoite perspective, kudzu is a very Kyoto ingredient).

With all these wild ambitions, I cooked over two days to make the sweet.  Alas, the red beans didn’t turn out quite as I had hoped because their skins broke. Ideally, they are supposed to be intact and beautifully plump. I discovered that Azuki cooking is an art, like making the perfect Canelés de Bordeaux. Cutting this delicious sticky thing was a challenge by itself, but I persevered!

Minazuki is eaten especially in conjunction with the day of the summer passage cleansing ritual known as “Nagoshi no harae” on June 30th. The ritual is carried out with the hope of being disease-free and to ward off disaster and misfortune. And since such a wish can be made by making and eating a humble sweet, I virtually send you all Minazuki, to wish you good health for the rest of this difficult year.

New work by Shumpei Yamaki in our shop->

I will never forget the first time I went berry picking with my host family in British Columbia in the summer as a high school exchange student. Back then in the late 1980s, I was only familiar with strawberries, which to me was a winter fruit as they are grown in greenhouses in Japan. But that Canadian summer, there were so many different kinds of berries to pick and eat. There was plenty of time for these berry escapades as daylight stretched way past 9 o’clock in the evening. I remember that I was very happy then, and ever since, berries lift my spirits up.

As the weather warms and my favorite summer fruits and vegetables start appearing on the dining table, my eyes seek refuge from the heat in the cool of porcelain ceramics, woven bamboo, and hues of blue, green, and purple.

Tea master Sen no Rikyu’s Seven Precepts, which is basically a code on organizing lovely and memorable gatherings, includes this piece of advice: “In the summer, provide a sense of coolness.” For example, in summer tea preparations, a water jar may be covered in freshly washed leaf with dews remaining on top, or a tea bowl may be brought in filled with water to convey a feeling of coolness. Even in our currently stress-filled pandemic world, I have found that taking the time to select utensils and set a seasonal table for my husband and myself provided a sense of calm and place.

And because I love the combination of Shumpei Yamaki’s clean forms in white clay, gray, green, blue, and peach colors created by the fire and ash, I specifically asked him for some porcelain work this summer, in addition to his usual stoneware work. I’m delighted to share these glacial works by Shumpei with you, and hope that you’ll take the time to look at photos of them taken at different angles so that you can discover the subtle and amazing complexities that the wood-firing process can give to a porcelain’s surface.

Ceramics by Shumpei Yamaki in our shop ->

When I was 5 years old, a guest stayed at our little apartment in Japan. In the morning, my mother served the usual breakfast of grilled salted salmon with miso soup and rice. Seeing that the guest carefully removed the skin of the salmon and left it on their plate, my young unfiltered mouth blurted out: “wah, you don’t eat the skin? It’s really tasty you know, it’s the best part…what a waste (mottainai)!”.

My mother to this day talks about this episode and how embarrassing it was for her because it was obvious that I wanted the guest to give me the salmon skin if they were not eating it. And for a long time after the incident, there was an uncomfortable glare coming from my mother whenever I sat down with guests at the dining table.

Speaking of skin, the other food that I like to eat right now with skin are the kabocha pumpkins that are coming into season.

To prepare kabocha, I cut them up into generous chunks with the skin and put them in a shallow braising pan in a single layer. Then I add about ¼ -½ inch of water, drizzle a little olive oil, and sprinkle salt, cover and boil for about 10-12 minutes. The key is that there is enough water to boil and slowly reduce. After turning the stove off, all the water gets absorbed into the pumpkin leaving no liquid. I prefer this simple preparation to the normal Japanese recipe that calls for sake, sugar and soy sauce because I find that recipe too sweet.

The result are firm chunks of delicious pumpkin pieces that can be eaten hot or cold. And the best part is the contrast of texture between the skin and the pumpkin meat!

Whenever I’m served peeled kabocha, I say loudly in my head “mottainai“! And, you may be surprised that there are things that people eat with skin in the US that almost all Japanese don’t, such as peaches. The first time I saw my husband eat peaches with skin, I was horrified. Japanese generally like to eat fruit without skin, and I should do some research as to why this is for another blog post. In the meantime, enjoy your kabocha with skin, and maybe also your salmon skin? Otherwise, MOTTAINAI!

Ceramics by Hanako Nakazato will be available  in our shop on August 15th at 6:00 am  ->

Did you eat ‘strawberry milk’ when you were growing up? It was huge in the 70s in Japan (along with mini-skirts and permed hair), and I begged my mother to buy us the ‘strawberry spoons’ that were perfectly designed to squish the strawberries in the milk with their flat bottoms.

As a little girl, I always believed that “strawberries sprinkled with sugar and squished in milk” was a fancy western way to eat strawberries. But now that I think of it, I’ve never seen anyone eat strawberries in this way in the U.S. or Europe.

According to my parents’ generation, strawberries that first became available to the general public in Japan in the post war Showa era were extremely sour and so the Japanese concocted ‘strawberry milk’ as a way to enjoy this sour fruit.

Eyeing the massive demand for a utensil that efficiently squashed strawberries in milk, the ‘strawberry spoon’ was created in 1960 by Kobayashi Kogyo Co., a cutlery manufacturer in Niigata prefecture, and their ‘Romance’ line of cutlery received the prestigious Good Design Award in 1974. So this company joins the ranks of Japanese titans like Sony and Toyota as the pioneers of Japanese style.

This marvelous invention lessoned the likelihood of strawberries slipping or flying out of the bowl across the table, which saved the day for a lot of busy Japanese parents. 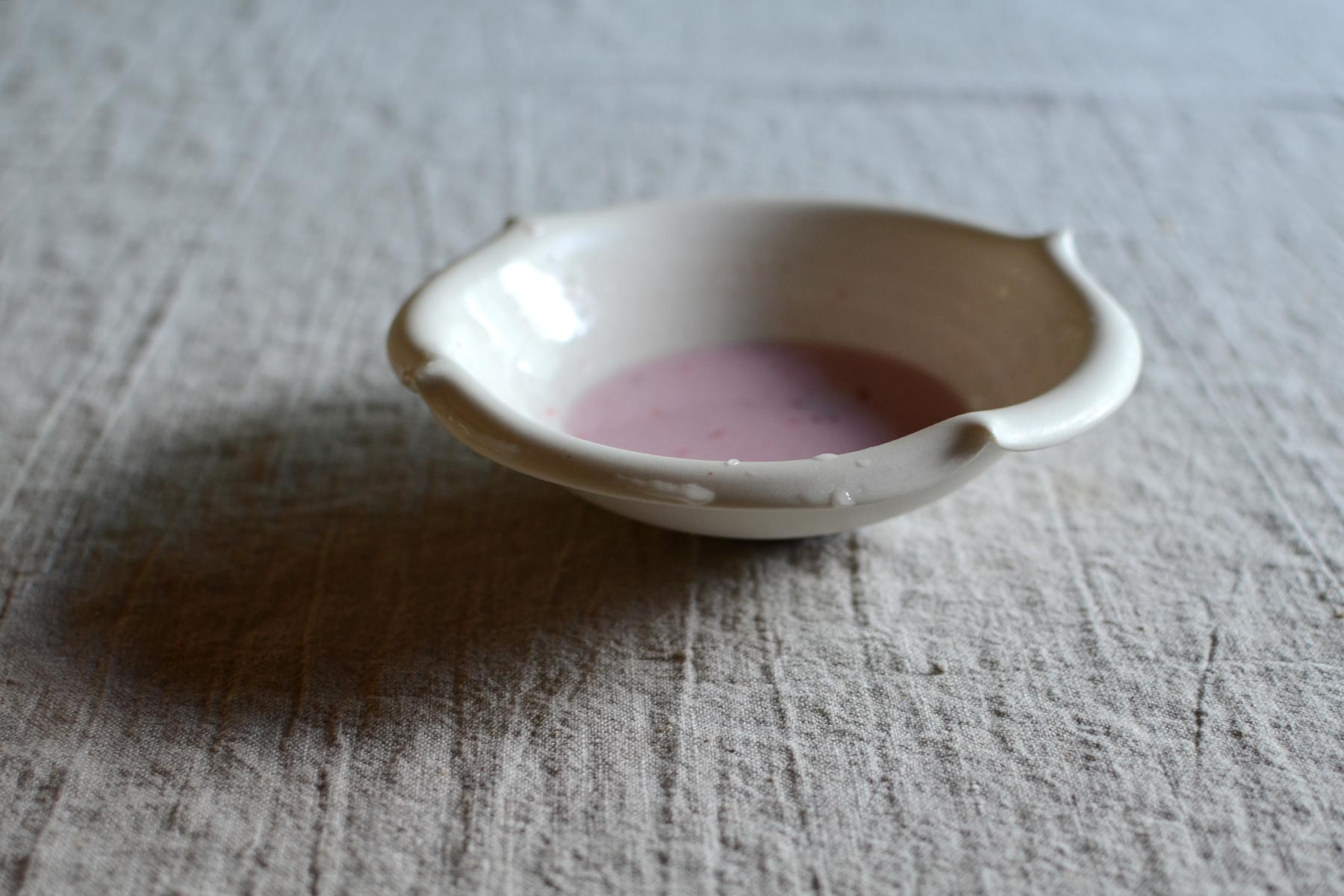 And the best part is when all the squished strawberries are eaten, you get to drink the sweet strawberry milk straight from the bowl!

Ceramics by Kazu Oba in our shop ->

Looking back, I realize there were so many things that I disliked eating when I was a child. One of my arch enemies was myoga, the flower buds of Japanese ginger that appeared regularly at the dinner table in the summer and did not go away until October.

Just like green onions, myoga was served as a garnish in miso soup, cold tofu, and other delicious things that, to a child’s tongue, tasted far better without this cursed topping. These terrible condiments are called yakumi, which means medicinal garnish, and my dream was to move to a world where they served food without them.

The other problem with myoga was that it was also the motif of my family’s crest. When I discovered this fact, I was so disappointed that I wasn’t born into a family with beautiful flower crests like Wisteria or Paulownia. I mean, why a lowly vegetable?

Years have passed and now a cold tofu without yakumi would be a let-down at the dinner table. And I even rather like the fact that a hardy shade-loving Zingiber is the motif of my family’s crest.

Autumn is here and that means butternut squash and apple season has arrived! As the temperature drops (even in Southern California), I start to crave hearty hot soups and so decided to make a delicious soup with these seasonal ingredients and share the recipe with you.

When serving a meal with several courses, I like to serve soups in small vessels so that the guests have plenty of appetite left for the rest of the dishes. Hanako’s ribbed cup (or shinogi sobachoko) carries about 6 oz of soup per cup and is the perfect ‘goldilocks’ solution: not too little and not too much.

Don’t forget to put on your favorite music before you start cooking!

9. Remove the bay leaf, puree the mixture in a blender, strain through a chinois.

10. Add the remaining chicken stock until the soup is at the preferred consistency, bring to a simmer, add nutmeg and salt and pepper to taste.

11. Pour the soup in the ribbed cup and garnish with croutons and chopped parsley. Place the apple chips on the side.

Do you think food only looks good and tasty in plain-colored, uniformly mass-manufactured vessels? At Studio KotoKoto, we believe that appreciating and enjoying the vessels that contain the food should also be an important and fun part of the dining experience. We want people to ask not only what is on the plate but also who made the plate.

In this food blog, we want to inspire the notion that food and craft are inseparable by offering ideas and thoughts about this relationship. To do this, we will feature a handmade piece by an artist and suggest a dish to go with it.

Today we are using a double-layered mesh (ajiro) woven bamboo tray by Takami Yasuhiro of Chikuseikan*.

The refreshing summer look of this vessel is perfectly suited for plating delicious, bright appetizers, and so we decided to serve shrimp and avocado canapés. A simple chip and dip recipe with a fine dining twist by Ai makes them really attractive!

Now all the parts are ready to build the canapé.